As part of aviation policy, the UK government set up an independent commission to examine the need for additional UK airport capacity and recommend to government how this can be met in the short, medium and long term.

Whilst I don't want to go into details about that process (the website for the Commission is here) what has come out of it so far is that a shortlist of options have been selected by the Commission for more detailed work.  One of them is construction of a third runway at Heathrow Airport, and within that proposal is a surface access proposition that includes a congestion charge for road traffic accessing the airport.

Heathrow Airport Limited has produced its own documentation about its proposal on this website with downloads available here.   Media comment has been on the BBC and Daily Telegraph among other media outlets.

I'm not going to comment on the proposal at all here, as my sole interest in placing it on this blog is for the interest of readers regarding road pricing, and because I am myself undertaking work for the Airports Commission.  As such I am neither expressing a view about the proposal for a congestion charge, nor any of the airport expansion proposals (which for the purposes of completeness include proposals from Gatwick Airport Limited and Heathrow Hub, with a separate investigation into the idea of a new Thames Estuary Airport).  Heathrow's proposal is the only one so far to refer to road pricing and is mentioned as a post-2040 implementation.  Certainly I don't believe there are any such charges applied at airports elsewhere in the world, although parking charges may sometimes be used to partially address this.

Key statements regarding the charge are as follows, from Volume 1 of the submission (PDF):

Beyond 2030, once our comprehensive network of public transport services is in place, we believe there is a case for introducing a new congestion charge zone to further reduce vehicle journeys to Heathrow. Revenues could be ring-fenced to fund major rail, London Underground and road infrastructure improvements. It could also be used to fund sustainable travel initiatives, public transport service improvements and local community projects. If expansion were to proceed we would work with local people and relevant authorities to define how such a zone would be applied. These public transport improvements will enable Heathrow to deliver more flights, without increasing airport related traffic on the road.

We believe there may be a case for introducing a congestion charge zone at Heathrow, once public transport improvements are in place. This would provide an opportunity to manage airport traffic levels and emissions by charging those with the biggest impact. We would wish to consult on many issues to ensure any such proposal is appropriate and fair, such as exemptions that could be offered to blue badge holders, low emission vehicles, local residents and licensed taxis. A charging zone will provide an opportunity to ring-fence revenue (in the form of an enhanced ‘Super’ Public Transport Levy fund). This could be used to support funding of major surface access schemes, and to fund sustainable transport projects in the wider area to benefit local communities.

Certainly this is one option to address traffic congestion at major airports.  The final report of the Airports Commission will not be released until mid 2015, which is expected to recommend a preferred airport expansion option.  It is not clear whether that will include any comment on the congestion charge element of the Heathrow proposal, whether or not Heathrow's airport expansion proposal is recommended by the Commission for adoption by government.
Posted by Scott Wilson at 19:00:00 No comments:

The biggest tolled urban highway tunnel in the world?  Well certainly the most expensive if it were ever to be built.

That's what has been proposed for London - yes London, according to the Evening Standard. Now there isn't money to finance it, nor planning permission or any details.  It is, at best, a vision of what might be a good idea, primarily to get ring road traffic off of the at street level connected series of streets that currently form the congestion charge zone, and into tunnels. 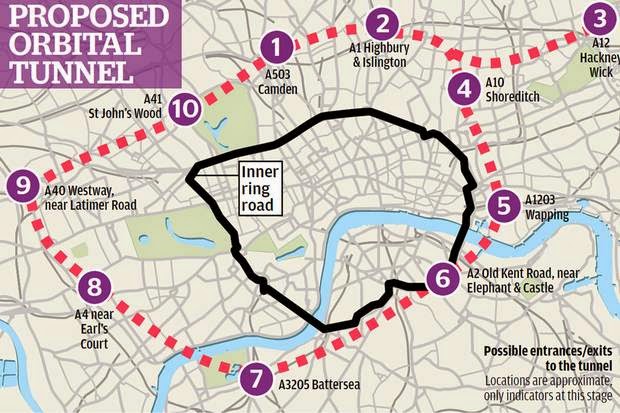 The cost is mooted at around £30 billion (US$50.5 billion), which is eye-wateringly high, but reflects deep-bored tunnels and likely very expensive sites for entrance and exit points.  However, let's think about how it might work:

- Tolls 24/7 at revenue optimising levels. Should be little real concern about monopoly pricing here;
- Extend the London congestion charge zone out to the boundaries of this road, hypothecating net revenue to the new road (and charging by distance and time of day);
- Reallocating road space from parts of the inner ring road for other road users, but also parking and commercial use, raising more revenue;
- Recovering part of the increase in value from properties along existing roads seeing a significant reduction in traffic;
- Dedicating the tunnels to ultra low emission vehicles operating in semi-automatic formations, so that capacity is doubled;
- Using the tunnels to facilitate express bus services as well (London has few of those);
- Replacing fuel duty on London roads with a distance based charge reflecting capacity and demand.

I believe the idea has some merit, and I think arguments about local air quality may well have significantly dropped due to technology by the time this sort of road might be completed, but also technology will have significantly increased capacity on existing roads.  Claims it will just fill up with traffic would be countered by tolling, and given that central London traffic is growing again with the congestion charge, it may simply be that London road users would be willing to pay for a faster road at levels not seen in other cities.

It is certainly worth some more detailed scrutiny and a range of scenario modelling exercises, but I suspect it will be some years before this will come to any fruition.  Perhaps more realistic might be parts of the plan or a few strategically located tunnels to bypass major bottlenecks (from point 9 to 7 on the map for example, or 6 to 5).  It is radical for a city that has had no major new road capacity built since the 1990s with the controversial East Cross Route.

It's important to think about several dimensions to the idea which should mean thinking about it differently from past proposals, such as the previous ringway ideas for London.

- Fully electronic free flow tolling means that such a road can be priced to avoid inducing demand that exceeds capacity.  Indeed such tolling should enable higher charging of parallel routes, so that through traffic is taken off of existing streets.
- Ever lower emission vehicles should help address environmental concerns.  Having such a road provide discounts for such vehicles can help accelerate this.
-  Greater automation of vehicles, allowing more capacity on existing roads, but also increasing capacity of new roads enhancing their utility and closing the gap between rail and road based transport for urban capacity.

All of this is not in the short term, but plans for major highway projects like this are far from short term, and so should be developed with an eye to that sort of future and given the scarcity of land in London, identifying locations for entrance points to tunnels should be the priority because acquiring such land and gaining planning permission to use it for that purpose is going to be the number one issue (it isn't money that people will protest about).

Below is the network (in blue) of motorways/major arterial highways London would have got had plans in the 1960s been completed, which was for four ring highways to be built.  This is superimposed on what exists, as the only one that was built was the M25, combining parts of the third and fourth ringway.  It wold have meant an inner ring motorway, a second ringway taking the North Circular and extending it, and a third ringway linking up with the M25 at the northwest and the southeast, plus a few other new motorways (notably the M23 to the south, M12 to the east and M1 extended south).  Had it been built as planned, it would have had a brutalist impact upon the city in many locations, but the counter is that many town centres are blighted now by high levels of arterial traffic that would otherwise have bypassed them.


Compared to that grand plan, below is what was actually built, besides the M25, only parts of other roads were completed, notably much of the North Circular was upgraded, the East Cross Route built to connect the Blackwall Tunnels to the North Circular and A2, and the infamous Westway and stub of a West Cross Route.  Much more detail can be found out about London Ringways on these websites, CBRD and Pathetic Motorways.  Of course the result of this is that it's far easier to get across north London than south London by road, and there is a dearth of river crossings east of Tower Bridge.


The new London inner toll tunnel ring would look something like this, below, in addition to the current network.


So it would be different from what was originally planned, would feed off of existing arterials from the east and west, but is specifically designed to enable the existing street level ring road to be substantially altered in parts to accommodate more pedestrians, cyclists and buses, whereas previous plans were to add capacity primarily to relieve congestion, rather than also reallocate road space.

From a road pricing point of view, it represents perhaps a very expensive and grand version of what has already been done in Oslo.  Can pricing, the rise of ultra low emission vehicles and modern tunnelling create new roads in central London that enhance the environment and mobility?

I think it's worth looking at, but given I am resident here I've written a bit more background on the idea, since it is not entirely new.