The Observer reports numerous stories of vehicle keepers charged for use of the Dartford Crossing (Kent, UK) without actually using it because the Automatic Number Plate Recognition (ANPR) system for identifying vehicles is generating errors in number plate recognition. Stories include cases of change of ownership that get ignored, and also an account that had automatic top up but had the top up declined, without the motorist being aware of it.

Failures in ANPR reading will, of course, happen. Classic errors include getting 0 and O mixed up along with 1 and 7, but some of the errors in enforcement appear to be strange. Any lookup of a number plate with the Driver and Vehicle Licensing Agency (DVLA) should identify the vehicle make, model and colour which ought to rule out most errors of identification.

Highways England interestingly reports 93% compliance with the toll, which is not bad, but clearly not at an optimal level (I would have thought over 95% would be the target). However, the article outlines a number of theories as to the compliance issues. One being the alleged lack of signage about the toll, including the use of the “C” congestion charge sign used there (seen below).  Dartford Crossing is, legally, a congestion charge, because the capital costs of all three stages have been recovered, so it remains as a traffic management measure (although the cost of maintaining and operating the two tunnels and bridge is around half the net revenues from the toll). Yet many people consider the “C” sign to refer to the London Congestion Charge. To almost anyone, Dartford Crossing is a toll, as it applies to a single route, it replaced a toll and there is little sign that the charge reflects demand by time of day (except that it does not apply overnight). 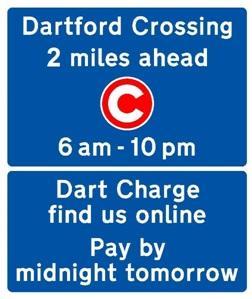 All of this ought to be teething problems, and it appears that some effort is being made at “soft” enforcement with initial penalties being waived within two weeks for motorists who may well have not known of the need to pay. For me, I think this demonstrates the importance of people in the toll and highway management industry thinking of road users as customers, rather than people who ought to simply do what they are told.

The Dartford Crossing is a service that is charged for, and what is needed is for those who encounter it for the first time to understand that they need to pay and to have options to pay that are easy. Imagine a motorist driving alone for the first time over the crossing, with obviously no chance to write down a phone number or website address to pay. Yet options ought to clearly exist for the few motorists without web based payment access to go to a service station or a kiosk to pay by cash or card.
Posted by Scott Wilson at 19:00:00