On the 1st of July the most populous and richest state in the US launched its pilot programme to trial road user charging, for both light and heavy vehicles, called the California Road Charge Pilot Program.

For the next nine months, participants will simulate paying for road use by distance or time, after which Caltrans will assess the performance and public reaction to the various charging options.   Undoubtedly this is the highest profile live pilot of road user charging for cars anywhere in the world, and so not only is it being watched in the US, but around the world.


Over 7,500 individuals had expressed interest in participating in the pilot with 5,000 having been chosen to participate.   Selection of participants has been partially focused on achieving a demographic spread based on income and location as seen below:

1. A prepaid time permit which allows unlimited use of the roads over a fixed period of time, in 10 day, 30 day and 90 day increments (akin to vignette systems seen in Europe);

The process for participation is outlined below.

I'm more interested in the three latter options, partly because I doubt that a time permit can co-exist with a distance based permit without road users gaming the options to their advantage.  There are advantages and disadvantages of all, and the key reason why there are multiple options is privacy.  In the US, there is considerable concern that any distance based charging system involving GPS will become a mass surveillance system.  This is being addressed in two ways.  Firstly, by offering options that do not involve location data being collected.  Secondly, by having private companies offer the service and collect the charge.  This separates the state government from the collection of data.

The pilot is not being operated by a one-size-fits-all single operator, but rather choice is the keyword, with competitive delivery of account service delivery.   This competitive dynamic should help to ensure the performance of all participating companies is enhanced, and may offer a taster of how deployment of this sort of system may progress in the future.

Azuga and Intelligent Mechatronic Systems (IMS - branded as Drivesync) are offering multiple mileage based accounts for participants (covering options 4 and 5).   Azuga offers options including a plug in device for the vehicle, a car's built in telematics (if compatible) and a smartphone app.  Drivesynch offers a plug in device or a car's telematics.

Arvato Bertelsmann is operating the California State Account Manager, which is supplying options 1 to 3.  EROAD is offering solutions for heavy vehicle participants (options 4 and 5).

The reason for the pilot is simply revenue. The chart below is the California Air Resources Board forecast of future traffic demand and fuel consumption in the state.  This pilot is intended to develop a medium to long term solution to this problem which cannot be resolved by simply increasing fuel tax. 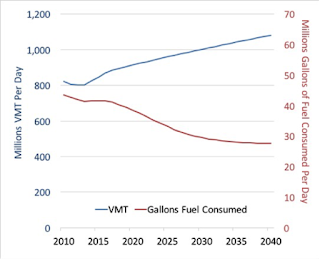 The basis for the pilot is Senate Bill 1077 which Governor Jerry Brown signed into law on 29 September 2014, which requires the state of California to design and implement a statewide pilot program to study the implications of a road charge model no later than January 1, 2017.

The Bill states as follows:

(a) An efficient transportation system is critical for California’s economy and quality of life.
(b) The revenues currently available for highways and local roads are inadequate to preserve and maintain existing infrastructure and to provide funds for improvements that would reduce congestion and improve service.
(c) The gas tax is an ineffective mechanism for meeting California’s long-term revenue needs because it will steadily generate less revenue as cars become more fuel efficient and alternative sources of fuel are identified. By 2030, as much as half of the revenue that could have been collected will be lost to fuel efficiency. Additionally, bundling fees for roads and highways into the gas tax makes it difficult for users to understand the amount they are paying for roads and highways.
(d) Other states have begun to explore the potential for a road usage charge to replace traditional gas taxes, including the State of Oregon, which established the first permanent road user charge program in the nation.
(e) Road usage charging is a policy whereby motorists pay for the use of the roadway network based on the distance they travel. Drivers pay the same rate per mile driven, regardless of what part of the roadway network they use.
(f) A road usage charge program has the potential to distribute the gas tax burden across all vehicles regardless of fuel source and to minimize the impact of the current regressive gas tax structure.
(g) Experience to date in other states across the nation demonstrates that mileage-based charges can be implemented in a way that ensures data security and maximum privacy protection for drivers.
(h) It is therefore important that the state begin to explore alternative revenue sources that may be implemented in lieu of the antiquated gas tax structure now in place.
(i) Any exploration of alternative revenue sources shall take privacy implications into account, especially with regard to location data. Travel locations or patterns shall not be reported, and legal and technical safeguards shall protect personal information.
The Bill establishes already that charges that vary by location are not being considered.  California's Road Charge is not a trojan horse for any form of congestion pricing.  It is seen as a pure revenue replacement exercise.

Of course California is at the forefront of plug-in electric vehicle takeup in the US as seen by this image from the US Department of Energy in 2015:


California is clearly the highest, with Hawaii second (and also investigating running a pilot) with Washington, Georgia, Oregon and Vermont the remaining states with more than 1 per 1000 people.  Of course Washington and Oregon are developing or running pilots already.   Yet road user charging isn't primarily about electric vehicles, but about fuel efficiency.   Road Charge would replace California's gas tax if it were implemented.

Fuel tax isn't a good way of charging for road use

Fuel tax is a very poor way to charge for road use.  It is only a very rough proxy for road use and about the only thing it is useful reflecting is CO2 emissions.  It is not even good at reflecting noxious emissions, as highly fuel efficient diesel vehicles may emit many more toxins than less efficient petrol vehicles.

Fuel tax cannot reflect variations in infrastructure costs or demand/supply.  Neither can it adequately reflect the increased costs of wear and tear imposed on roads by heavier vehicles, as fuel consumption does not rise at the same rate as wear and tear which increases exponentially along with weight per axle.   Likewise, fuel taxx charges light vehicles differentially for infrastructure costs even though the marginal costs imposed by all of them are identical.  Those with smaller, newer vehicles pay less than those with larger, older ones.

I hope that the California Road Charge Pilot gets a good response from participants and lots of useful information to inform the assessment of the options.  Getting the public involved is important.  I wish all participants the very best.  California, the USA and the world are watching.