It has been remiss of me not to explain to those outside the USA what is the most groundbreaking initiative on road pricing at the Federal level that I am aware of.

Perhaps the most interesting transport policy development at the Federal level in the United States under the Obama Administration has been the FAST (Fixing America’s Surface Transportation) Act, which besides a great deal of taxpayers' money for road, railroad, public transit and other modes, has made special provision to support states that want to demonstrate what it calls “user-based alternative revenue mechanisms”. 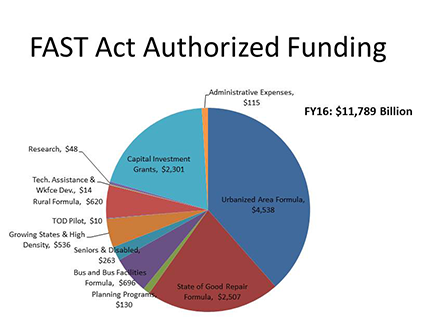 Section 6020 of the new law provides US$95 million over five years (hidden in to help states interesting in progressing various forms of road charging, on a 50/50 basis. US$15 million is available in the first year (under the Research pool of funding in the pie chart above). States or group of states may apply for funding through a grant process administered by Federal Highways Administration (FHWA). Applications for funding are expected annually, with the deadline for the first tranch of applications having passed on 20th May, decisions from FHWA on which states have been granted funds are expected shortly.

The objectives are outlined below:
According to FHWA, States receiving funds under this provision are required to address the following issues:
Recipients may also address—

What this means is interest in finding new ways to raise revenue from using the roads, around replacing or augmenting fuel tax. I doubt if the popular trend for HOT lanes is innovative anymore, nor is simply the use of tolls for new or improved infrastructure, but rather it looks like interest in more network wide charging, whether it be tolls on all major highways, distance charging or time based charging (charging based on duration of network use or prepaid access like vignettes in Europe).

It outlines key obvious policy issues around acceptability and privacy, but also interestingly embraces "use of independent and private third-party vendors to collect fees and operate the user-based alternative revenue mechanism".  This implies using either the open system approach embraced in Oregon (and now California with its pilot), Hungary and New Zealand, or a full blown PPP, both of which are significant innovations in a country that has one of the lowest levels of private sector participation in the ownership, operation and funding of roads in the developed world.


The inclusion of "market-based congestion mitigation" is interesting too, which could range from peak time tolling, to cordons, to full network time/location based charging (the latter potentially presenting challenges on privacy). Market based mechanisms will need to have some direct link of charges to demand and supply, and arguably even infrastructure costs. Ensuring road users pay for the full cost of infrastructure would have an incremental impact on congestion for a start, but to have a time and location based element will be a challenge, although one that pilots should consider.


It's obvious what this is meant to mean, which is concern that road charging will disproportionately impact those on low incomes or those who use the roads the most. Not sure anyone does equity impacts of the price of food or clothes or many other goods or services where people pay according to supply and demand, but still the impacts of major reforms are important to identify. Part of this should also identify:

- the absolute equity impacts of fuel tax (i.e. are those able to afford to buy expensive electric cars having the roads they use be subsidised by those who cannot?);

- the equity impacts of general taxation funding of roads (consider if telecommunications or electricity infrastructure were funded that way);

- the equity impacts relatively in the current charging system, who bear the greatest cross-subsidy cost and benefit?

This is critical, but also alongside ease of enforcement. Users should know what to do and for the compliance costs to be low, but also it should be easy to detect, identify and pursue those who deliberate fail to pay or seek to defraud any system.

Flexibility and choices for users sings like what has been done in Oregon and California. Users are expected to get more than one option to pay for road use, bearing in mind that the scope to do this is limited by the inevitable game playing of users to minimise charges. The obvious example is not to have both time and distance based charging, because the highest users will pay by time and be cross subsidised by the lowest users. Concerns about overcharging the highest users could be address by volume discounts (as in Slovakia).

One of the biggest criticisms of any form of road charging compared to fuel tax is that fuel tax is cheaper to collect. This is indeed true. Yet it ignores the deadweight economic impacts of not directly charging for a service, and the behavioural impacts that ensue. That's not to say that ensuring costs are minimised is not important, it absolutely is. However, I always recall a study in New South Wales Australia that estimated that the economic benefits of abolishing registration fees for vehicles, and replacing it with simple distance/time/location based charging (location being urban/rural, time being peak/offpeak in urban only) would far outweigh the collection costs.

Who is going to get funding?

That's the US$15 million question. It is known that there are proposals in from at least California, Oregon, Minnesota, Washington, Hawaii, four states in the "I-95 Coalition" (Connecticut, Delaware, New Hampshire and Pennsylvania) and RUC West (a grouping of Western states formerly known as the Western Road Usage Charge Consortium). However, there may be others.
Posted by Scott Wilson at 04:16:00