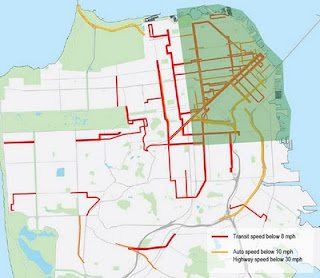 As reported on 17 November, one of the most significant road pricing proposals in the USA today are the two options presented by the San Francisco County Transportation Authority to introduce cordon pricing.
One is the central city cordon (right), which would see an AM peak (0600-0900) charge of US$3 with a PM peak (1500-1900) charge of US$3.  The charge would be capped at US$6 and those who pay tolls on the Bay and Golden Gate Bridges would get a US$1 discount.   Residents, the disabled and "low income" drivers would get 50% discounts.  For what it is worth, it is my preference although I'd want to be sure that roads to bypass this cordon were clearly marked and capable of handling through traffic.  Indeed the appraisal done of this option indicates it is better, although I am not fully convinced of those results. 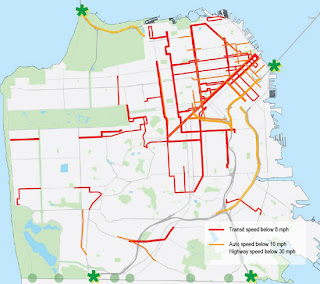 The second option is the southern cordon (right) which imposes charges at the Golden Gate and Bay Bridges, and more controversially one at the administrative boundary of San Francisco County at the southern end.  The charges would be the same.
Now I have a few problems with the concepts, in particular I don't think you win motorists over by spending the majority of the money raised on modes other than roads (public transit needs serious structural and governance reform in San Francisco so I would prefer it was reformed before it got more subsidies), but in principle this is a significant leap forward.
San Francisco Streetsblog outlines some of the more irrational arguments, but also the media coverage that evades the facts around the proposals.
One that I wanted to highlight is that by Adrienne Tissler who bizarrely argued that the proposals would increase congestion because of peak spreading (she didn't call it that because she doesn't actually understand it).  She made this astonishing contradictory assertion:
Drivers who can will adjust their drive times to avoid the toll hours, creating congestion during nontoll hours. This just means bad traffic all day, at all hours.


So she figures, correctly, that some drivers will change drive times, but she claims there will be "bad traffic all day at all hours".  However, what does she think happens when people change driving times?  There is less traffic at the most congested times.   Presumably the charging hours have been set because at other times there is capacity in the road network that can be used without creating significant delays.   Otherwise, Adrienne Tissler, 2010 vice chair of the Metropolitan Transportation Commission, doesn't understand basic economics because she thinks increasing the price of a basic commodity INCREASES demand.

In NO case where congestion charging has been introduced has congestion suddenly worsened at other times or on bypass routes (that will be the next argument - the quaint notion that when faced with a charge, motorists will avoid the place they were intending to go to in the first place, clogging up other roads).
As I mentioned before, if you want all of the publicly available information about the San Francisco congestion charging proposals it is here.
I firmly believe that the county line proposal is not worth pursuing, but it will be the one argued by most opponents because it doesn't really match where congestion is, rather it is simply an administrative boundary.   If it gets dropped then the San Mateo County opposition may be diluted as one report indicated there wont be opposition to a central city focused charge.
However, the conventional arguments will come out.  The fear it will damage retail (when the charge doesn't cover the daytime interpeak).  The fear it will hurt the poor (some of whom don't drive, and it ignores the proposed discounts for residents and the low income).  The fear it is just another tax (which it arguably is, but for which the revenue will be put into a cash starved transport system).
Yes a lot of detail needs to be ironed out, including how and whether all the discounts can be affordably introduced (I have designed a low income discount scheme for road pricing and it is far from cheap if it isn't to become an easy source of fraud), and how the roads adjacent to a cordon (and through it) will be managed.  However, San Francisco has an opportunity to show the rest of the USA how basic fundamental free market principles of pricing can be used for the greater economic and environmental good of a city, when applied to roads.
Posted by Scott Wilson at 04:48:00