Tehran is proud of its congestion charge

For readers in the United States who advocate congestion pricing, pointing out Tehran as a working example is probably not going to fill you with enthusiasm.  Yet it is true, Tehran does have what it calls a Limited Traffic Zone, which is essentially a large area charging zone around downtown Tehran that motorists must purchase a permit to access or travel within.
Details of the Tehran system are available at its own website in English, with Youtube videos (2 in Persian, 1 in English below).  However, for the sake of brevity I will summarise the details I have managed to obtain here:
- The system came into operation in April 2010;
- It is entirely Automatic Number Plate Recognition (ANPR) based, taking images of the number plates of every vehicle crossing the cordon;
- The number plates are matched to lists of exempt vehicle and those that have purchased permits, with those that have not getting sent a fine by matching the number plate to the owner's address;
- It replaces a manual "restricted traffic zone" that involved paper permits, enforced by Police inspections of vehicles, somewhat akin to Singapore's original Area Licencing Scheme.  This existed since 1979.
- The previous manual system had around a 30% violation rate;
- 104 entrancepoints are equipped with ANPR cameras;
- Mobile enforcement units operate within the zone to capture vehicles travelling within the area that have no permit;
- Motorists can purchase single day, week long or annual passes to access the Zone;
- Payment can be online or by phone;
- The maximum fine appears to be US$6500!
-  Emergency vehicles, buses, public taxis and diplomatic vehicles automatically have permits.
-  There are discounts for disabled motorists (100% for those more than 70% disabled);
-  "Private local taxis" are discounted too.
-  Commercial vehicles pay more, including vehicles registered to companies.
-  Government vehicles all pay as well.
The price for a daypass is 123,000 Iranian Rial (about US$11.60), a week long pass is 738,000 Rial (U$69.50), an annual pass is around 1,850,000 Rial (US$174).  In other words, regular users get a considerable discount if the pay in advance.
The hours of operation were not explicit on the website, but it alludes to counting vehicles between 0630 and 1700, which would seem logical, but is unclear if certain days are uncharged (e.g. Fridays and Saturdays being the weekend). 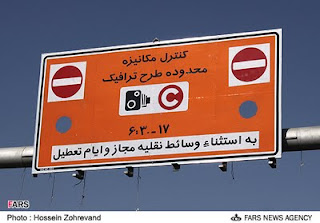 Most curiously, the system has copied the London congestion charging signage, which should be a compliment to Transport for London.  Using the "C" logo was hardly mandatory for the Islamic Republic of Iran, but it clearly was thought of as being valuable.
The Youtube video in English is below, more are available in Persian on TehranTraffic's channel.
Overall, I say good on Tehran for taking the initiative in implement a form of pricing.  Certainly the breakdown of vehicle classes seems very complex when you see the price schedule, and the annual passes seem like a major discount on quite a punitive charge schedule.  However, Tehran's traffic IS chronically bad, and whilst money has been poured into a metro and upgrading public transport, getting the roads to move at all is the greatest challenge.
What I'd like to see is whether any work has been done on the results to determine how successful the system is, in terms of reducing traffic and what net revenue is generated.  I would have thought there could be potential to take it further, having annual passes only for certain public vehicles, and leave the rest to weekly passes to incentivise changes in behaviour.  In addition, there may be benefits in targeting certain crossing points at different times, although this complicates enforcement and charging, especially using number plates alone.  Still, it would appear that one of the greatest challenges - having a reliable number plate database for owners and their addresses, has not been a barrier to Tehran.  I suspect that more authoritarian governments have the incentive to get this right, although its complexity and scope for human error are enormous.
What this proves is that developing countries can implement congestion charging, and do it rather well.  This appears to be more advanced than Dubai's rather abysmal Salek system, in terms of its potential to create positive impacts on transport.   However, it shouldn't be neglected that Tehran had been running a permit based system for downtown since 1979, what this system has done is to update it for the 21st century.
Posted by Scott Wilson at 00:35:00