Australia needs to charge electric vehicles for road use

Until around a year ago, the Australian Federal Government was investigating the merits of introducing some form of distance based road user charging for light vehicles.  The primary focus being on the expected revenue sustainability and equity issues as the light vehicle fleet transitions towards hybrid and pure-electric vehicles over the next couple of decades (the question of charging heavy vehicles is dealt with quite separately in Australia, and is subject to its own reform programme known as Heavy Vehicle Road Reform, and currently includes a small scale trial of heavy vehicle road user charging).

It had come from the visionary Minister for Urban Infrastructure at the time, Paul Fletcher, who had announced in November 2017 that there would be a study into light vehicle road user charging.  The revenue sustainability issue has barely registered yet in real terms, not least because fuel duty in Australia is not hypothecated at all, so could arguably be said to be just an incidental tax on using the roads paid for by light vehicles.  The study was presumably cancelled because of political concerns, particularly because at the time, political polling indicated that the then Liberal/National Government led by Scott Morrison would be unlikely to win the Federal Election which was held in May 2019.

What happened was that Scott Morrison DID win that election, with a slightly increased majority, but nothing has been said about road user charging since then, except in the heavy vehicle sphere.  Yet there have been increasing calls from various parties to do something about it, not least because it is easier to study, test and implement road user charging for electric vehicles when they form such a tiny proportion of the vehicle fleet.

Let's be clear, in 2018 only 0.3% of new vehicle sales in Australia were pure electric, although more recently around 2.3% are hybrids.  So it is a very small issue in fiscal terms, but the growth is considerable.  In the first six months of 2019, new electric vehicle sales are double that of the same time in 2018, and hybrid sales are up 84%, with a 10% decline in new petrol vehicle sales (and 9% on diesel), indicating a growing share of the overall market.

With so few vehicles affected, you might wonder about the politics of acting, and the simple point is that it is never likely to be easier.  It might not be the issue around revenue that is important now.  The Grattan Institute dismissed the issue of replacing fuel tax in its recent report on congestion pricing, but the issue really shouldn't be about revenue first, but rather equity.  Why should someone who spends over A$100,000 on a new Tesla get to use the roads, essentially for free?

Furthermore, what I witnessed on TV last night indicated that it might be easier than many politicians think.

I happened to glance a TV polemical talk show in Australia last night, Paul Murray Live on Sky News Australia.  It is widely recognised as a rightwing, conservative (although more libertarian than traditional conservative) show, with a host that might be said to reflect some of the views of the Liberal Party base.  For Americans, it is closest thing Australia gets to Fox News.  The strong narrative is sceptical about new taxes, growth in government and a strong belief in personal freedom.

At around one hour and fourteen minutes into the show (excluding commercials), the host reported that The Australian newspaper published a poll result in which 76% of Australians believe that electric car users should pay to use the roads, and that around half believe it is unfair that they don't pay fuel excise.  The show continued with the conclusion from the host and the two panellists (one being Liberal Party Vice President Teena McQueen and other being former Labor candidate Sam Crosby that there should be action taken to develop means to charge electric vehicles for using the roads, and the sooner the better.

This is notable, not least because what is often referred to as "Sky News at night" is usually filled with commentators which are very much to the right of the Australian political spectrum, unashamedly, and to the right of the Government.  Now the audience for the show is not large, but it is likely to be around 50,000 viewers, mostly of whom might be considered the Liberal/National Party "base" and those further to the right.

So what COULD be done?

For a start, the Government could start the conversation about the issues and the possible solutions.  The number one issue should not be revenue sustainability, as this falls out of the issue rather naturally and is less convincing in a country without hypothecation of fuel tax revenue.    Rather, the issue should be equity.  The graphic below from The Australian outlines roughly the issue, which is that owners of older larger cars pay a lot more to use the roads than hybrid or electric vehicles, and the question of how fair this is? 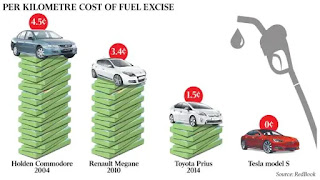 The counter-argument is that electric vehicles are "good" because of their environmental impact, which would hold some sway if the purpose of fuel excise was as an environmental tax on emissions, but that isn't the stated purpose.  If fuel tax is to be seen as a way of recovering road infrastructure costs from light vehicles (which part of it is for heavy vehicles), then it becomes a more compelling narrative around fairness.  Electric cars need well maintained roads and contribute to demand for safer and higher capacity roads as much as other vehicles, so it isn't clear why they should be exempt from paying.

The second point is to discuss the possible solutions, which really come down to two options:
1.  Significantly higher registration fees
2.  Distance based road user charges.

Higher registration fees are more likely to deter purchase and ownership of electric cars, but also wont reflect their use of the network.  It will encourage electric car owners to drive more after paying a high fixed cost, rather than consider the costs of each trip.

Distance based road user charges are exactly what is currently piloted in Oregon, Washington and Hawaii, and has been piloted in California and Colorado, and will be implemented in Utah.

The graphic below Washington Road Usage Charge Pilot Project outlines the options to measure distance used in that pilot:

Australia could test these options and possibly others.

What Australia needs is to study the outcomes of the extensive overseas research on this, and New Zealand's own long standing Road User Charging system (which will be able to charge electric light vehicles in due course), then look to pilot multiple options for electric vehicle owners.  It will also need to consider how to treat hybrid vehicles, since they continue to pay fuel duty, so would need to have that refunded or pay a road user charge that is lower than that for electric vehicles.

It is likely that if confined to electric, hydrogen fuel cell and hybrid vehicles, that a study into charging light vehicles beyond fuel tax (and the relatively high price of registration) ought to be able to obtain some bipartisan support, as it has done in the United States.
Posted by Scott Wilson at 21:22:00