Auckland Transport and the New Zealand Ministry of Transport today released a series of reports that represent Phase Two of The Congestion Question study, that has been investigated the merits and options for congestion pricing in Auckland. The point of the study is to investigate congestion pricing to improve network performance a stark contrast to more recent examples discussing road pricing (see Australia on electric vehicles, the UK on road pricing) which are about raising revenue. In fact, the Auckland Mayor has already stated that he sees this as replacing the regional fuel tax (NZ$0.10/litre plus 15% GST), which is likely to have positive economic, environmental and social impacts, as it would mean only those travelling at peak times on congested roads would pay.

t is a joint project between central and local government, and the technology option proposed is use of Automatic Number Plate Recognition (ANPR) cameras, although other options were considered.  The proposal for pricing is peak only, with the sample tariff below considered for the city centre cordon option: 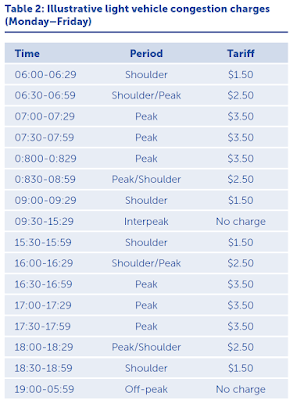 The purpose of the study was to undertake a detailed investigation of the options and established some preferred options for more detailed design and possible implementation.  Given transport in Auckland is dominated by use of the private car (and trip patterns that are highly dispersed, with only 13% of employment in the central business district).  Transport in Auckland has had literally billions of NZ$ spent on it in the past twenty years, this includes:

The table below summarises the analysis of impacts of the shortlisted options: 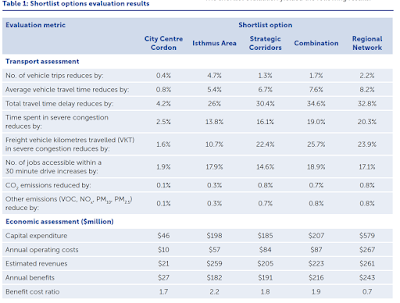 The key conclusion from the reports is that the two preferred options are:
A third option is to combine the two, which is likely to make the most sense. It is particularly refreshing to see a study that is driven by improving the conditions for those paying a congestion price and treating the net revenues as being incidental, and looking for it to replace an existing blunt tax (although at a certain scale it would raise more revenue than the regional fuel tax).

There is a LOT of content to get through for those interested, it follows this project structure: 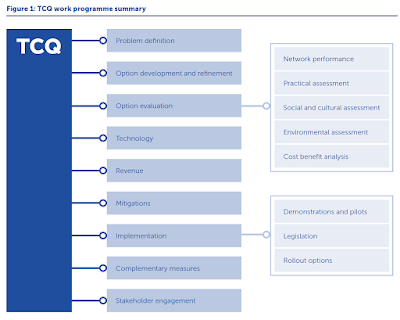 So here are the links to all of the reports (all PDFs):It's worth noting that GNSS as a technology option was considered and rejected, and a demonstration project has not been proposed so far. The next steps will be decisions by Ministers and Council on consultation and further detailed work, and the possibility of enabling legislation. If successful, it could be the first "new world" city after New York to introduce congestion pricing, and doing so in the context of the dominance of the private car.

Disclaimer: Milestone Solutions, under its previous business name, D'Artagnan Consulting, was technical advisor to the project, and I personally led that analysis and advice to Auckland Transport.
Posted by Scott Wilson at 18:44:00