Hong Kong has been investigating congestion pricing since 1984, but in recent years seemed like it was likely to progress some sort of cordon for the Central-Wan Chai area. The Transport Department Hong Kong website appears to have frozen at 2020, which is not surprising, as this coincides both with the beginning of the Covid-19 pandemic, but also the period of protests and unrest arising from opposition to the increasing mainland takeover of the Special Administrative Region.

Meanwhile Hong Kong has made a more obvious step announcing it will introduce congestion pricing applying to the three Cross Harbour Tunnels. 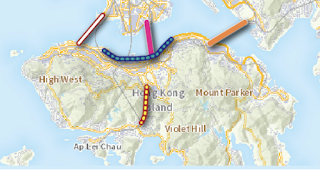 The Standard (Hong Kong) reports that between 0700-1000, 1700-2000 the Cross Harbour Tunnel (the central and most congested one) and the Eastern Harbour Crossing (on the right) tolls will increase by HK$20 (US$2.55) per crossing. It won't apply to the much less congested Western Harbour Tunnel, which will have a discount applied (HK$5-HK$10) once the franchise for that tunnel expires (putting it in public ownership) later this year. Buses will also have a cap introduced (which had not previously applied, noting most Hong Kong bus services are commercial albeit regulated services).

It's worth noting the Cross Harbour Tunnel is priced currently at HK$20 per car (US$2.55), the Eastern Harbour Crossing at HK$25 (US$3.18) but the Western Harbour Crossing is HK$75 (US$9.55) because the latter toll is recovering the capital costs of building it through a private concession (the other two tunnels were built as private concessions but returned to public ownership some years ago).

It's reported around 60% of vehicles using the tunnels are private cars.

Full details of CURRENT tunnel rates are here. The rates apply to buses and trucks, all largely proportionate to road space occupancy.

This looks like a positive move, of course it won't replace what is needed in Central/Wan-Chai, but it is clear that the Cross Harbour Tunnel in particular is a major bottleneck, and this should help to encourage both modal and time shift, but also attract more demand to the Western Harbour Tunnel, which generally operates free flowing most of the day.